Aaron "Ace" Elam is a Player for Falling Esports. A veteran of the pro scene, he has numerous accolades to his name including first place at the Halo 4 Global Championship and three major 4v4 event wins. He is most well known for his time with teams such as OpTic Gaming, Team Liquid, Status Quo, and Str8 Rippin.

Aaron Elam was born on April 2, 1993. He is the younger brother of Kyle "ElamiteWarrior" Elam. The Elam brothers are from Florence, Kentucky.

For MLG Charlotte 2007 he joined FSK with Dasteez, Hi Value and Killzone placing top 48. He would repeat the placing in Meadowlands, now as a member of Haxz Taco Stand with Haxz, Helluva and Swordey. He and Haxz would then join Gandonator and Ray ebz on Team Seize the Day, again placing top 48, this time in Dallas. He would head to Chicago to plAce top 48 again, now with Bushido, Lies and D3monhunti2. He joined gPorter, Squirrel and ghostatackiswak on Gporter's Guitar for Orlando, getting 28th before joining TBLOTOS pN alongside Detach, Monkey and old teammate Ogre 3, for a top 15 placing in Vegas.

He rejoined Helluva and Ray ebz for MLG Meadowlands 2008 now playing with Overshield as the Coconut Rebels. They secured a 20th plAce finish. He and Overshield then left to join Team Breaking Point with Chig and Clutch, for a 9th plAce finish in San Diego and 11th in Orlando. Clutch and Overshield would then be swapped for Lowkin and Mudvayne before Toronto, where they again finished 11th. Ace would finally earn himself a 10th plAce finish in Dallas after swapping Lowkin for Poweezy.

Ace then joined Totz and Flamesword to form the unchanging core of Status Quo for 2009. They attended both Meadowlands and Columbus with Strongside, placing 7th in both events. Strongside was swapped for Clutch heading into Dallas, where they finished 10th. They played the final two tournaments of the year in Anaheim and Orlando with LegendPimps, finishing top 8 and then 9th respectively.

2010 saw Totz leave for Enable and LegendPimps swapped for Assault, to create a team that would last two full years. They came in 4th in Orlando, Columbus and Raleigh before placing 7th in D.C.. They would end the year with a 2nd plAce performance in Dallas. 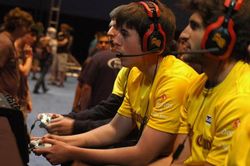 Ace during his time with Status Quo in 2011.

The same roster played at MLG Dallas 2011 and won, netting Ace his first tournament victory and only one to date. The roster then came in 7th at MLG Columbus 2011 before securing 2nd plAce in Anaheim. The group managed a 5th plAce showing in Raleigh and 4th in Orlando before ending the year with a 7th plAce finish in Providence.

Ace defeated iGotUrPistola in the finals of the Halo 4 Global Championship FFA to win $200,000. Later in 2012, Ace attended the MLG Fall Championship 2012 Halo 4 event as a member of Dynasty, placing top 24.

After MLG dropped Halo 4 from the pro circuit, Ace returned to Status Quo, attending AGL 7 Knoxville and UMG Chicago 2013 and placing 2nd and 4th, respectively. Ace then attended AGL 9 Atlanta as a member of Believe the Hype, again placing 4th.

Ace attended the pre-release PAX Prime Showdown 2014 as a member of eXcellence Gaming, placing 1st. He then signed with eSports powerhouse OpTic Gaming and attended the ESL MCC Launch Invitational, placing top 6. Ace remained on OpTic Gaming to start off the inaugural HCS season. They plAced 3rd at Iron Games Columbus 2014, and 4th at UGC St. Louis 2015 with the same roster. They have since made a team change, replacing Aries with ContrA, and plAced 2nd in HCS Online Cups #6 and #7 before taking 3rd plAce at Gamers For Giving 2015. OpTic then attended the season finals at PAX East 2015 where they finished a disappointing top 8.

OpTic underwent a roster change in the offseason, swapping out ContrA for Maniac. The new roster's first event together was Iron Games Atlanta 2015, where they finished 6th. They improved slightly on their placing at HCS Indianapolis, finishing 5th, but closed out the season with another 6th plAce finish at the HCS Season 2 Finals.

Ace and OpTic were the only North American team invited to compete at the Gamescom Invitational 2015 four-team event. They were defeated in the first round by Supremacy, finishing in the bottom two. On August 27, 2015, Team Liquid announced that they had signed Ace to play alongside Ninja, Chig and Mikwen, with Ace's brother Elamite coaching. For Iron Games Daytona 2015, Ace and Elamite formed Liquid Vibe with Legit and Legend. During the tournament weekend, Legit was attacked outside the venue, leaving him unable to compete for Sunday. Legit was replAced by Clutch, and the team ended up finishing in the top 8. The Liquid roster went through major revisions during the Halo World Championship 2016 qualifying stage, eventually being finalized as Ace, UnLegit, aPG and Heinz and qualifying for the NA Regional Finals as the 4th seed. Liquid were invited to the X Games Aspen 2016, where they finished 5th - 8th. At NA Regionals, Liquid finished top 8, qualifying for Halo World Championship 2016. At Worlds, Liquid started off strong, winning their pool and securing a spot in the Championship Bracket. In the bracket, they were upset in the first round by Denial eSports, putting an end to their night with a top 8 finish.

On April 10th, Ace announced his return to OpTic Gaming alongside FlamesworD, MaNiaC and Naded. When this roster failed to qualify for the Summer 2016 Pro League at the Invitational Qualifier, Flamesword announced his retirement and moved to the position of coach, allowing OpTic to pick up Str8 SicK. With Str8 SicK on board, the team again failed to qualify at the Summer Qualifier, placing 3rd in their group. OpTic finally qualified by finishing 2nd in the Last Chance Qualifier. Shortly after the LCQ, Naded left the team and was replAced by aPG before the season began. The season did not go well for OpTic, with a final record of 2-12 and an 8th plAce finish. They managed to keep their spot in the Pro League by finishing 2nd in the Relegation tournament.

On September 14th, it was revealed in an episode of Vision that OpTic was releasing its Halo roster and picking up the former Counter Logic Gaming roster. MaNiaC announced his retirement from competitive Halo in the video as well. The team began competing under the name LOL, playing with MaNiaC in their first match despite his retirement, and substitute RyaNoob in their second match. After a poor start to the season, LOL were left without a fourth, and unable to attend HCS Orange County 2016 with their full roster. Ace and LOL sub Renegade joined forces with Team Allegiance member ContrA and Ego Rangers member BxbyJ to form The MoneyMatches Team for the event. They ended up placing in the top 6. After OC, LOL finalized its roster, replacing MaNiaC with Eco, reuniting the HWC Team Liquid roster. The roster had a dramatic turnaround, winning the majority of its matches, and eventually picked up an organization in the form of the revitalized Str8 Rippin. Under Str8, Ace's team ultimately completed its comeback, finishing with a 7-7 record good enough for 4th plAce. At HCS Las Vegas 2016, Str8 took 4th plAce, with victories over the likes of Evil Geniuses and European champions FAB Games eSports, and back-to-back losses to Team Allegiance. At the Season Finals, Str8 were unable to defeat Team EnVyUs or Team Liquid, resulting in a 4th plAce finish.

During the offseason, Eco left Str8 Rippin. He was eventually replAced by Renegade. At the first event of HaloWC 2017 season - UGC St. Louis 2017 - Str8 showed that they were still a top team, dominating lower-seeded teams and nearly defeating Team EnVyUs in the WB Semifinals. In Losers, they took out Inconceivable in a very close match before a loss to Team Liquid sent them home in 4th plAce. At ME Las Vegas 2017, Str8 defeated Luminosity Gaming in an intense 7-game series to qualify for Worlds. They ultimately finished top 6 after a 4-2 loss to Pnda Gaming. At Worlds, Str8 were plAced in a group with FAB Games eSports and SoaR Gaming. They finished 1st in their pool after victories over both teams and met TMMT Crowd Pleasers in the first round. This time, they beat them 4-3, only to run into Team Liquid and get swept out of the Winners Bracket. In Losers, Str8 were plAced against Splyce, who they defeated in a monumentally close 4-3 series. They were then swept by Team EnVyUs and sent home in 4th plAce.

After Worlds, Str8 made a team change, replacing the departing Renegade with Danoxide. At UMG Daytona, Str8 finished 3rd in its pool. They started off well in the main bracket with a 3-0 win over Believe the Hype, but were upset by Oxygen Supremacy in the following round. After wins over eRa Eternity and Ronin Esports in Losers, Str8 were swept by Team Liquid and bowed out with a top 6 finish. After a poor start to the Summer Pro League season that saw them sitting in 8th plAce with no wins, Str8 made a roster change, sending Ace back to Team Liquid in exchange for Rayne. Ace's new teammates were SubZero, StelluR and Eco. The change helped Liquid move up in the standings, with the team ultimately ending the season in third plAce. At the DreamHack Atlanta Finals, Liquid started off strongly with a sweep over Luminosity Gaming, but they were taken out in the third round by Splyce. After eliminating eRa Eternity, Liquid were defeated by Team EnVyUs, leaving Atlanta with a fourth plAce finish.

During the offseason, Ace was dropped by Liquid and ended up returning to Str8 Rippin, now alongside Danoxide, Commonly and BabyJ. With no Pro League spot, Str8 instead competed in the Fall 2017 Open Circuit, finishing first in the first Legendary Cup and following it up with back-to-back second plAce finishes. They finished the season with a first plAce finish in the $5,000 Open Cup. At the DreamHack Denver Finals, Str8 made a statement with their first Championship Bracket match, sweeping the fifth seeded Luminosity Gaming. In the following round, they were swept by Splyce. After a close win over the French Supremacy, Str8 were eliminated by top European team Team Infused in a 3-1 loss, resulting in a top eight finish.

After Denver Ace left Str8 to team up with aPG, Lunchbox, and rising amateur Neptune. The team initially competed as Instinct before being signed by Renegades on February 9. At MLG Orlando, Renegades finished in the top six, losing only to OpTic Gaming and Team Reciprocity. The fifth seeded Renegades were able to qualify for Worlds out of pool play at MLG Columbus. They finished in the top six after 3-0 losses to Team Reciprocity and Team EnVyUs. At Worlds, Renegades finished second in their pool, losing 3-1 to TOX Gaming. In the first round of bracket play, Renegades were narrowly defeated by Team EnVyUs 4-3. They went down to the losers bracket where they took out Team Infused 4-1 before being swept by Team Reciprocity and sent home with a top six finish.

The following pages redirect here. There are three types of pages that may appear on this list:

The list is generated automatically. To request an addition to the list, you may use this form.