Michael "Flamesword" Chaves is a Halo esports player, previously a player for Status Quo. He is well known for his tenure as captain of OpTic Gaming and Status Quo.

Michael Chaves was born on October 25, 1989. He is from North Arlington, New Jersey. Outside of Halo, Flamesword is well known in the Call of Duty community for his involvement with OpTic Gaming. He is a former coach of the main OpTic Gaming Call of Duty and Halo roster.

Michael "Flamesword" Chavez started his career on Status Quo attending MLG Meadowlands 2008 with Brake, Prolific and S1y Fox, finishing 18th. S1y Fox was then swapped for Pilez before San Diego where the team managed a 20th place finish. The two would be swapped again for Orlando and Brake would be replaced with Elumnite for a 21st place finish.Toronto and Dallas would be played with Totz in place of Prolific and the squad would secure a 12th place, followed by a top 8 finish. He and Totz then picked up Ace to form the unchanging core of Status Quo for 2009. They attended both Meadowlands and Columbus with Strongside placing 7th in both events. He was swapped for Clutch heading into Dallas where they finished 10th. They played the final two tournaments of the year in Anaheim and Orlando with LegendPimps, finishing top 8 and then 9th respectively. 2010 saw Totz leave for Team Enable and LegendPimps being swapped for Assault, to create a team that would last two full years. They came in 4th at Orlando, Columbus and Raleigh before placing 7th in D.C.. They would end the year with a 2nd place performance in Dallas.

The same roster played at MLG Dallas 2011 and won, netting Flamesword his first tournament victory. The roster then came in 7th at MLG Columbus 2011 before securing 2nd place in Anaheim. The group managed a 5th place showing in Raleigh and 4th in Orlando before ending the year with a 7th place finish in Providence. 2012 would see Ace and Assault depart, in favor of Snakebite and Royal 2 for MLG Columbus 2012 where Flamesword would net his second tournament victory. 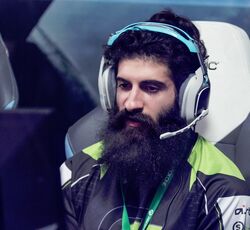 Flamesword sporting the "OpTic Beard" in 2014.

On December 10, 2014, OpTic Gaming announced its official "OpTic Halo" roster of Flamesword, Ace, iGotUrPistola and Snipedown. This roster attended the ESL MCC Launch Invitational and placed 5-6th. For the inaugural HCS season, Flamesword remained on OpTic, with a new roster of himself, Ace, Assault and Aries. They placed 3rd at Iron Games Columbus 2014, and 4th at UGC St. Louis 2015. Following UGC St. Louis, Aries was replaced with ContrA and OpTic placed 2nd in HCS Online Cups #6 and #7 before taking 3rd place at Gamers For Giving 2015. OpTic then competed in the season finals at PAX East 2015 as the #4 seed, taking a disappointing 7-8th place finish. OpTic underwent a roster change in the offseason, replacing ContrA with Maniac. The new roster's first event together was Iron Games Atlanta 2015, where they finished 6th. They improved slightly on their placing at HCS Indianapolis, finishing 5th, but closed out the season with another 6th place finish at the HCS Season 2 Finals.

FlamesworD and OpTic were the only North American team invited to compete at the Gamescom Invitational 2015 four-team event. They were defeated in the first round by Supremacy, finishing in the bottom two. Ace left OpTic soon after to join Team Liquid, leaving OpTic to pick up StelluR in his place. After four online qualifiers with StelluR, he and Assault left the team and were replaced by Chaser and LifeStyle. The new roster qualified for the HWC 2016 NA Regional Finals as the 16th seed, with Flamesword's Twitch stream of the Last Chance Qualifier gaining over 20,000 viewers. At Regionals, OpTic finished top 16, failing to qualify for Worlds. After Worlds ended, OpTic Gaming released Chaser and LifeStyle to ultimately end up with Naded Leonard and a returning AcE to replace the. OpTic was then invited to PAX East 2016 where the HCS Pro League Invitational 2016 was being held to have all four former Allegiance members battle it out for the second spot in the Halo Championship Series Pro League 2016. Cloud joined as OpTic's new coach a few days after they were invited to PAX. OpTic started off well as they 3-1 Enigma6, who was suppose to beat OpTic according to many in the community, but then lost eight straight maps to Evil Geniuses and then Team EnVyUs. They finished in 3rd place out of four teams.

On April 26th, 2016, FlamesworD announced his retirement from competing in professional Halo. He remained on OpTic Gaming's roster as their coach for a few months before eventually moving on. FlamesworD briefly came out of retirement in March 2017 for ME Las Vegas 2017, teaming with Hunter Jjx (also coming out of retirement), Claim and King Nick as Here 4 Fun. They placed top 24 overall.