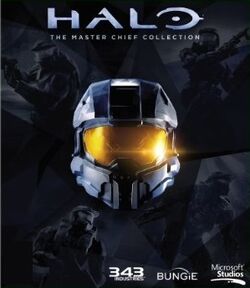 Halo 2: Anniversary is a video game for the Xbox One, exclusively available as part of Halo: The Master Chief Collection. It was developed by 343 Industries. It is presented as a remake of the original Halo 2, having been released ten years after. It served as the flagship game for the first two seasons of the Halo Championship Series.

Staying true to its name, Halo 2: Anniversary scaled back on many of the additions to Halo 4 in order to present a game more similar to the original Halo 2. Despite this, it still contains things that were not in Halo 2, such as certain weapons like the Silenced SMG, and power-ups like the Speed Boost. Alongside these additions, many of the remade multiplayer maps feature interactive elements that were not present in their original incarnations.

Halo 2: Anniversary contains exclusively maps inspired by those from Halo 2:

A remake of Relic is also currently being worked on by 343, targeted for release as future DLC.

Some of these maps contain new features that weren't present in their Halo 2 counterparts, such as destructible stalactites on Lockdown that, if shot at the right moment, can be used to kill enemies below.

Halo 2: Anniversary's competitive lifespan lasted from September 2014 and August 2015. During this time, 343 Industries teamed up with the Electronic Sports League to start the Halo Championship Series, an organized Halo esports league. The first two seasons of HCS were played on Halo 2: Anniversary. In the official HCS settings, only three maps are used: Warlord, Shrine and Lockdown, in a mix of Team Slayer, Capture the Flag, Team Crazy King, Team Oddball and Neutral Bomb Assault gametypes.

The most successful team in H2A was Evil Geniuses, comprised of Eric "Snip3down" Wrona, twins Justin "Roy" and Jason "Lunchbox" Brown, and Tony "Lethul" Campbell Jr. Their dominance began midway through HCS Season 1, when they started going on a tear in the HCS Cups and followed up with 1st place at Gamers For Giving 2015. They never looked back, going on to win every North American event from then on out, never being knocked into the losers' bracket.

In Europe, the most successful teams were Vibe, who most notably won the EGL Battle of Europe 2015 and earned a spot in the HCS Season 1 Finals, and TCM Gaming, who won three high profile European H2A tournaments.