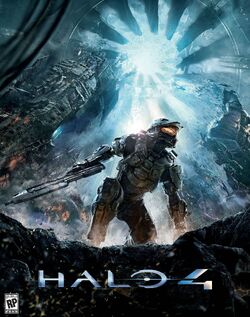 Halo 4 is a video game for the Xbox 360, developed by 343 Industries. It is also included as part of Halo: The Master Chief Collection for the Xbox One.

Halo 4 brought many gameplay changes to the classic Halo formula. These included the addition of a permanent sprint ability, new armor abilities such as the Thruster Pack, a new flinching dynamic while being shot, a new scoring system revolving around points rather than kills in "Infinity" gametypes, similar to Call of Duty, new weapons such as the Light Rifle and Sticky Detonator, and the ability to set a loadout of weapons to spawn with in certain gametypes. Most of these changes were poorly received by the competitive community, and are a major reason for Halo 4's lack of success as an esport.

Halo 4's campaign revolves around Master Chief crashing on a mysterious planet and attempting to return to Earth.

Spartan Ops is a new mode that continues the storyline after the campaign in the form of episodic missions that were released on a timely scale. Many of them reused locations from the campaign.

Halo 4 was not as prominent an esport as previous Halo games, with limited support on the MLG Pro Circuit. It was played at 1 MLG event, 7 AGL events and a variety of independent events. Its most prominent moment in esports however, was the Halo 4 Global Championship FFA event, where Ace won the $200,000 grand prize.

Its most successful team was without a doubt Ambush. The lineup mostly consisting of Formal, Heinz, Snip3down and iGotUrPistola won four straight Halo 4 events, and never placed below 4th.