Chris "ShockWav3" Smith is a retired player and caster most well known for his four year tenure with Carbon.

Chris Smith was born on January 17, 1989. He is from Berwin, Pennsylvania.

Chris Smith started his Professional Halo career under the name "Red Alert". His first tournament placing was a 3rd place finish at MLG D.C. 2005. His team, FinG BLiPPeD, included his brother Colossus, Pray4u and Strangepurple. He skipped the next two events and returned in Orlando as a member of iGameSpot (IGS) with Gandhi, McGavin and Vash. They finished 2nd, falling to StK in the finals. Smith then changed his ID to "ShockWav3" and the IGS team returned at MLG St. Louis, again placing 2nd and falling to StK (now going by Team 3D). The IGS roster again returned at MLG Las Vegas, again placing 2nd, this time losing to TmG in the finals. In four tournaments, ShockWav3 had only placed below second once, and never below third. In Seattle, IGS returned with a modified roster, swapping McGavin and Sergio for Defy and Karma. This change proved to be fruitful, as they defeated Storm Ventures in the finals to win the event. ShockWav3 would take the next two events off and return in Chicago with a modified IGS roster, having swapped Defy for Strongside. They would end up placing 4th, ShockWav3's lowest placing at the time. The team then parted ways with their organization and changed their name to Team Phreaks. The roster returned unmodified for the New York National Championships, where they placed 2nd, again losing to Team 3D in the finals.

Team Phreakz would stick together for the beginning of the 2006 season, but adopt a new name: Carbon. Carbon placed 3rd in both New York and Dallas, unable to overcome Str8 Rippin or Final Boss, the name Team 3D was now going by. Carbon improved on their placing in Anaheim, placing 2nd, but they still could not defeat the Final Boss juggernaut. After finishing 3rd in Chicago, the decision was made to replace Strongside with GH057ayame. With the new roster, Carbon finally toppled Final Boss and won in Orlando, and went on to close out the year with three straight event wins, the remaining two in the New York Playoffs and the Las Vegas National Championships.

ShockWav3 and Carbon returned with an unmodified roster to start the 2007 season. They started the season off with back to back 2nd place finishes in Charlotte and Meadowlands, losing to a modified Final Boss roster now including former Carbon member Strongside. Carbon managed to beat Final Boss in Dallas to win the event, but lost a step in the next two events, placing 4th in both Chicago and Orlando, but managed to finish in 2nd at the Las Vegas National Championships, losing to Final Boss. Carbon then attended the MLG Canada Open and placed 4th, closing out Halo 2 on a relatively low note. Amazingly, through 21 MLG events, ShockWav3's lowest placing in Halo 2 was 4th.

Carbon returned unmodified for Halo 3, and started the season off with a career low for ShockWav3, placing 6th in Meadowlands. Despite improving on the placing in San Diego, a team change was finally made, with Gandhi being replaced by Cpt Anarchy. The new roster would fare worse, finishing in 7th in Orlando and Toronto. This lead to another team change, swapping Karma out for Naded, but they again finished in 7th in Dallas. ShockWav3 and Carbon then managed their highest placing of the season at the Las Vegas National Championships, pulling off a 3rd place finish.

Carbon started off 2009 with a modified roster, having swapped out Naded for Soviet, and the new season started with a new low for ShockWav3, with an 8th place finish in Meadowlands. Despite replacing Soviet with Defy, the team again placed 8th in Columbus. It wasn't until the acquisition of Walshy and the return of Naded, replacing Cpt Anarchy and GH057ayame, that Carbon would become a top-tier team. The new squad finished 2nd in their first event together in Dallas, and followed that up with 3rd in Anaheim. They closed out the season with another 3rd place finish at the Orlando National Championships. This ended up being ShockWav3's last event as a player, as he retired after the 2009 season. 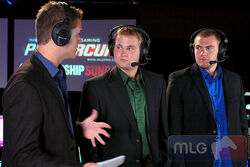 Shockwav3 (center) on the MLG casting team alongside Puckett and Gandhi.

Starting at MLG Raleigh 2010, ShockWav3 became a commentator for MLG Halo events, often working alongside Chris Puckett and former teammate Gandhi. He worked as a caster from Raleigh 2010 until the end of the 2011 season. ShockWav3 briefly returned to Halo competition for the Halo 4 Global Championship FFA event in 2013. He made it to the top 64 before being eliminated.